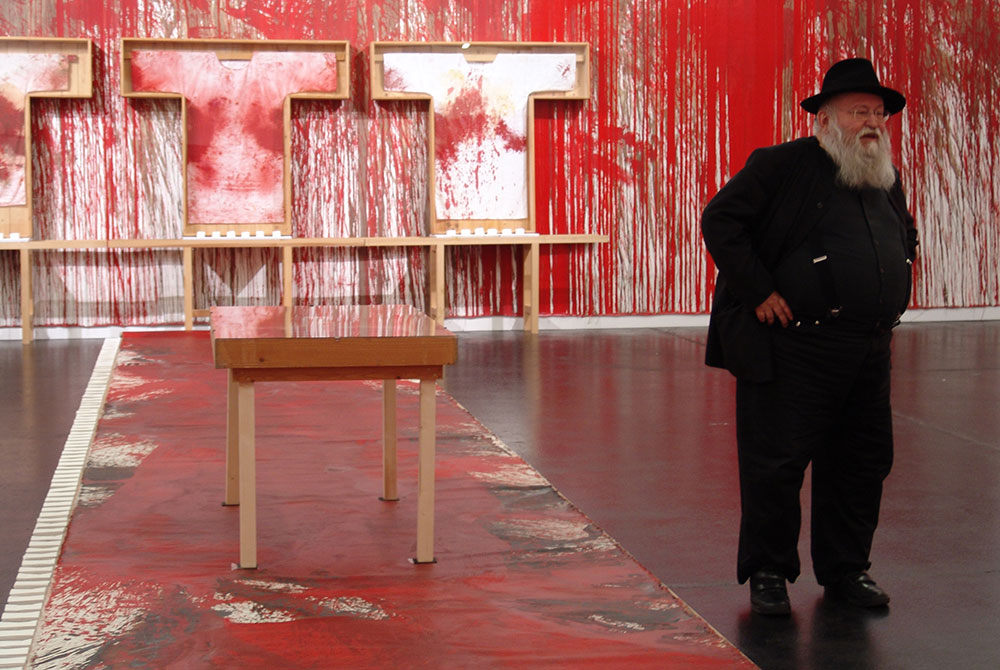 Hermann Nitsch, the painter, has achieved notoriety due to his provocative Actions, where he uses animal carcasses, crucifixions and naked bodies of performers. Back in 1960-s he used to be imprisoned for blasphemy in his Austrian homeland; twenty years after he has been praised as a living classic. But this story isn’t quite so straightforward, for some consider Nitsch to be yet another art salesman, who charges money for participation in his many day long “insanities”.

Hermann Nitsch is stubby and heavily built. By his age of 77, he had acquired a slouch and a long grey beard. He wears round glasses and a hat, prefers austere clothing and most usually wears black trousers with suspenders and a high-buttoned jacket.

The Nitsch’s happenings, which are events performed by actors under his direction, had had little change since 1960-s: they are many hour long, sometimes many day long Actions. These include the actors’ blindfolded meandering, pouring blood on each other, selecting a “victim” and tying it to a wooden cross.

The first Nitsch’s Actions had shocked the Austrian community and led the police to hold in detention for several days the painter who would become the “father” of a radical movement – the Vienna Actionism. 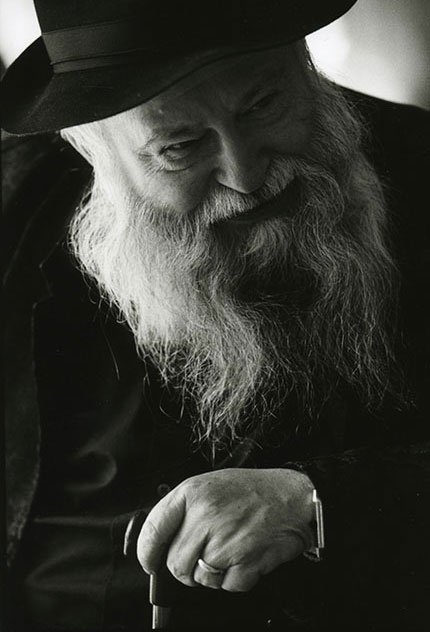 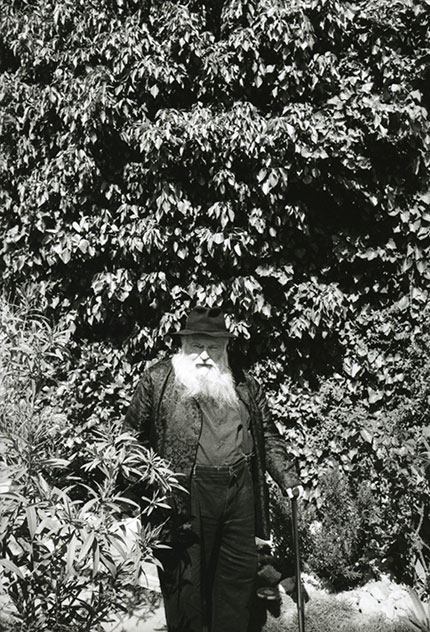 In his interview to the Vice Nitsch has told that he had decided not to deal with commercial art and advertising as far back as in the Vienna School of Graphic Illustration. He was attracted to something more elevated – up to the standard of Michelangelo, da Vinci, the art that troubles, The Passion of Christ, the ancient tragedies.

Then Nitsch began to paint copies of “Hundred Guilder Print” and “The Three Crosses” by Rembrandt, explore the plots of Tintoretto and El Greco. The young artist also enjoyed the work of Cezanne, Klimt and Munch. Today the Austrian states that with his art he wants to excite the viewer, and denies the intention to provoke him. 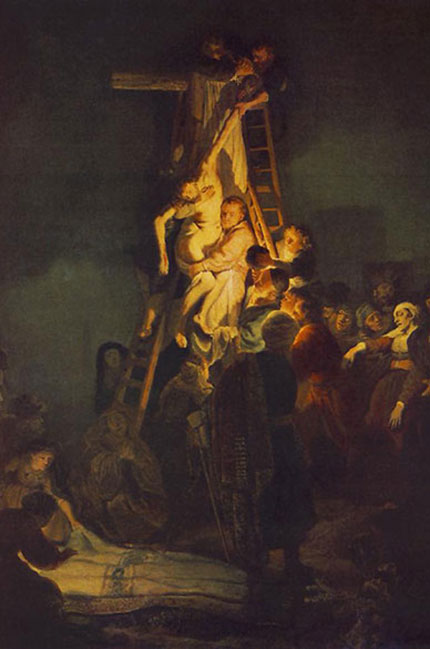 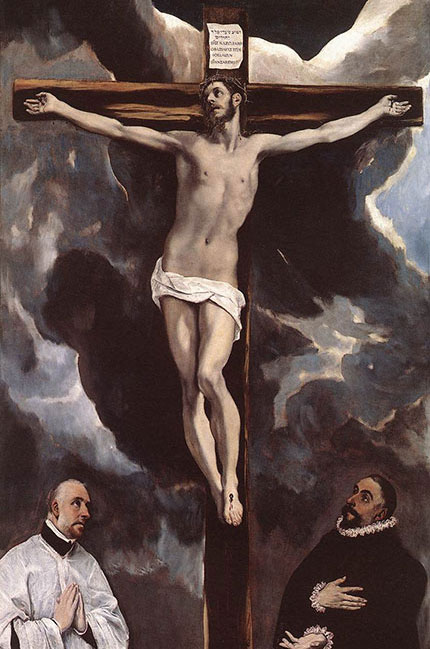 The contemporary events have never interested Nitsch. He had witnessed the information war between the former allies, who divided Austria by four after the Second World War. «Neither America nor Russia ever told the truth», — says the painter in his interview, hinting at the confrontation of the “victorious” countries, which had only vacated the state territory in 1955.

The 120-th action of Nitsch in July 2004 lasted two days. The Austrian had been assisted by several painters and accompanied by a hundred of musicians. In 48 hours they used up 5 slaughtered pigs and 600 liters of blood. They had butchered the carcasses, removed the insides and poured water on them – thus, according to Nitsch, they made a sacrifice to redeem the guilt of human existence. 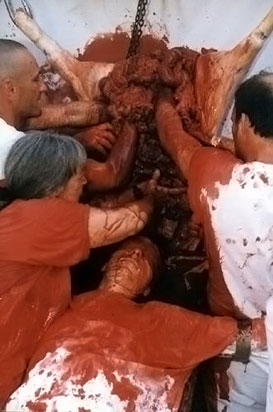 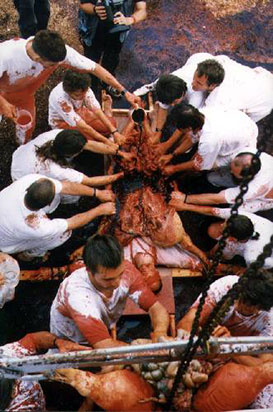 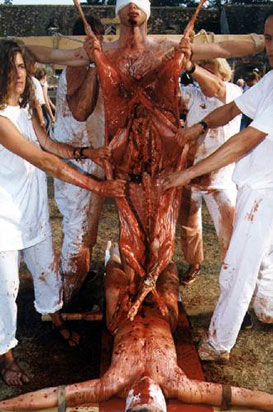 Nitsch has named the result an aesthetic psychoanalysis. In his words, during his happenings the “actors” embrace their sensual experience and immerse themselves in the joy of brutality. The artist means the aggression to reach the point of aesthetic arousal for the viewers as well. Nitsch believes the sacrifice to be an example of this joy of brutality, and calls it collective sadomasochism. 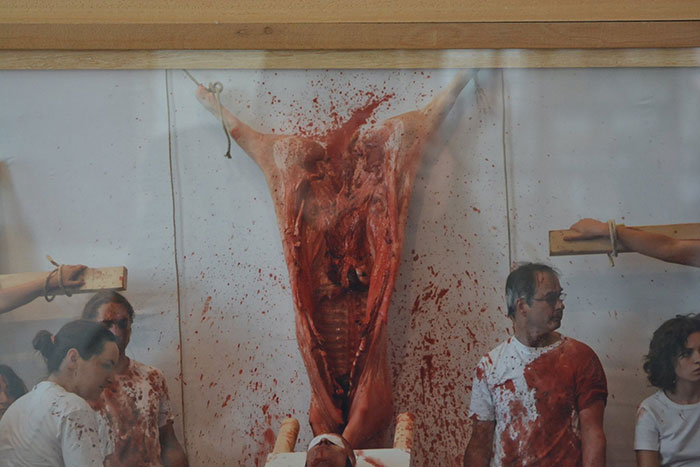 He is frequently asked about the source of this fascination with cruelty. Could it be due to the horrors of the two World Wars, between which he was born? Perhaps, replies the Austrian, they did indeed remain somewhere deep in his subconscious. Hence the blood instead of paint. “I will never work with any other material”, – says the Austrian.

Nitsch believes his art to be positive. He believes that it doesn’t evoke any tragic frustration, rather it helps the viewer to reach the catharsis and the state of altruistic love. Such he believes to be the true state of existence. Hermann Nitsch extolls the existence with a cacophony of whistles, drums, bell ringing and violins.

«I experienced so much joy while pouring the blood-red paint»

Nitsch is also well known for his performances – the painter calls them Action Paintings and describes them as an attempt to step out of the introspective process associated with the studio. 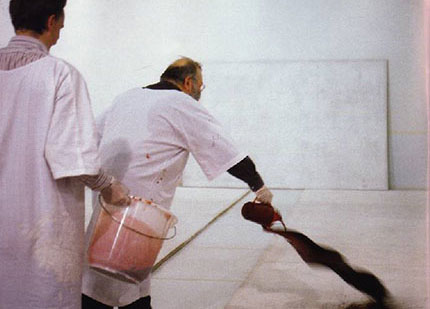 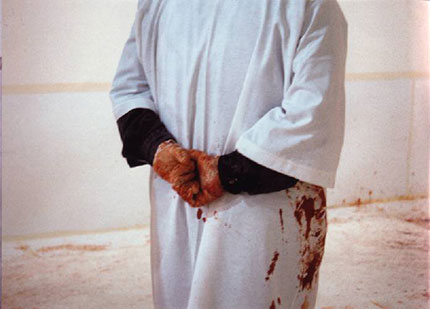 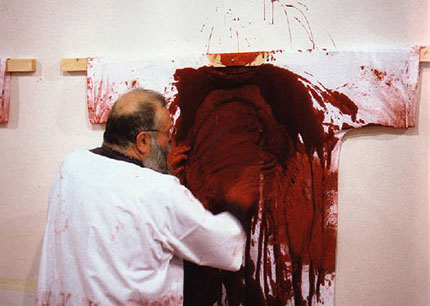 He equals painting in front of an audience to a collective sensory experience of the painter and the viewers, while the traditional art of painting he benames dead.

«In the hot august of this year I experienced so much joy while pouring, soiling and spraying these surfaces with blood-red paint. Trained through the Actions I gained a carefreeness, freshness and spontaneity that was not present in the early painting… I am glad, I triumph. The time has come, and I put on my clothing. I have stained my white mantle with raspberry-purple drops of blood. Thick drops of blood and moisty stains of sweat have soiled the cotton shirt» —so Nitsch recalls his impressions in the biography.

He also speaks there of the music that he composes himself for his Actions. In 2012 he introduced a symphony for a hundred pianos, 33 grand pianos and a synthesizer. “Noise is a key factor […] It [the music] intensifies the action, the action activates the music. It digs deeper into the abysses of the drama’s catastrophe” — he wrote in 1999. The artful performances are devoid of melody, yet they have the rhythm. The latter is created by Nitsch walking on the canvas, the sound of pouring paint, the movements of assisting painters and the noise of the audience. Wagner, Skryabin and John Cage are Nitsch’s favorite composers.

Nobody is going to arrest Nitsch in the XXI century. Since the late 90-s the painter allows anyone to participate in his Actions for a considerable reward. During these Actions, police and a medical team stand guard in the castle.

The painter became a living classic, there are two museums dedicated to him – one in Naples, another in Mistelbach, Austria. Hermann Nitsch’s works are exhibited in the Guggenheim museum in New York, the Pompidou Centre in Paris, the London Tate and other renowned centers of modern art. 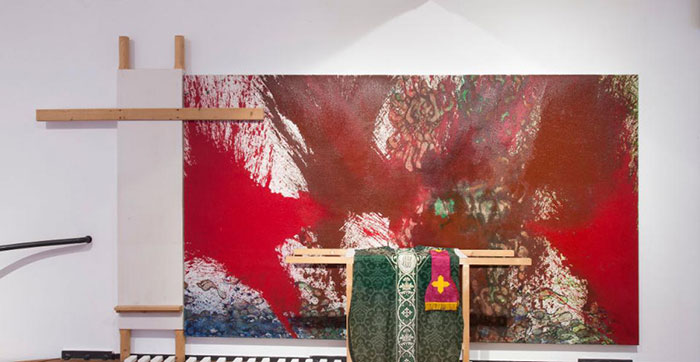 Nikolai Molok, an art critic and a former development director of the Stella Art Foundation gallery in Moscow, states in his interview to the “Russia” TV-channel: “According to the survey, 99% of Austrians know Hermann Nitsch. I personally have walked the streets of Vienna with him. People approached him and bowed, addressing him as “professor”.

They brought a Nitsch’s exhibition to Moscow in 2010. The exhibition included paintings, photos and a video of an Action. The gallery, where this retrospective was set up, was only available to visitors above 21 year old, and they were warned that some exhibits may evoke aesthetic and emotional protest. The Time Out magazine wrote that the exhibition contained scenes of violence, masochism and bloody rituals. 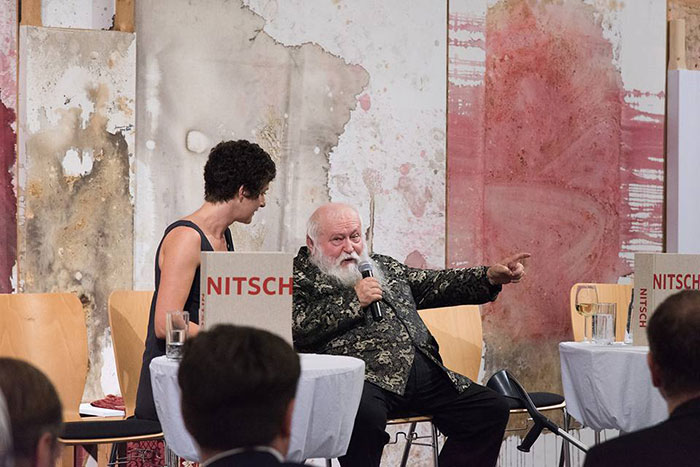 Nitsch at the presentation of his book. Photo: facebook.com/nitschmuseum

Now is the time to reflect on this whole story. In September 2015, a monography was issued, covering 50 years of Nitsch’s creative work. The book has a thousand pages and weighs 6 kilos. It took three years to cram in all information about the painter. The Austrian journalists are already referring to this edition as the “Nitschepedia”.