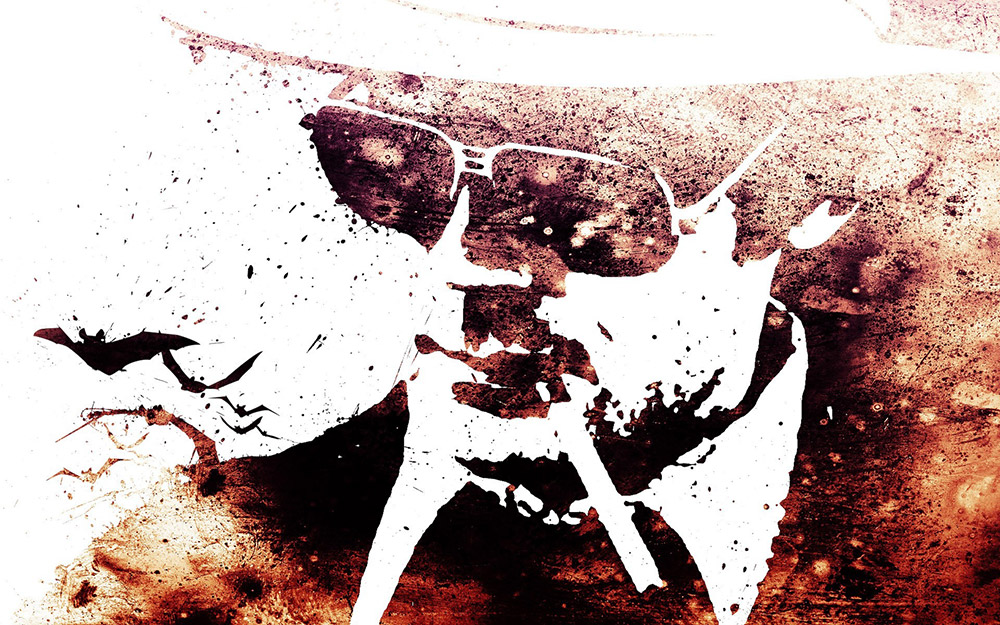 In the beginning – was there a Word?

To understand Hunter Stockton Thompson you must really get the Gonzo. Today this term labels a whole branch of journalism, it’s even included in the Oxford Dictionary. It first appeared in the distant 1970 when the “Scanlan’s Monthly” magazine (later smoothly shut down for political reasons) had published a young Hunter’s article “The Kentucky Derby is Decadent and Depraved”. It was supposed to tell about the races that took place in Louisville, but it didn’t even mention horses. Weaved of scrappy notes, written in toxic frenzy, it had some sharp, scathing and provocative expressions showing the face of American reality.

Pink faces with stylish Southern sag, old Ivy styles, seersucker coats and buttondown collars. “Mayblossom Senility”… burnt out early or maybe just not much to burn in the first place.

For the first time the reporter was not just an impersonal witness of events but a most immediate participant. It was once said about Hunter:

What you do is absurd, monstrous, but ingeniously cool! Pure Gonzo!

That’s how the Word got started. It has a lot of translations, each one spot-on: mindless, crazy, insane, eccentric… But to understand Gonzo you must really get the life of Hunter Stockton Thompson. 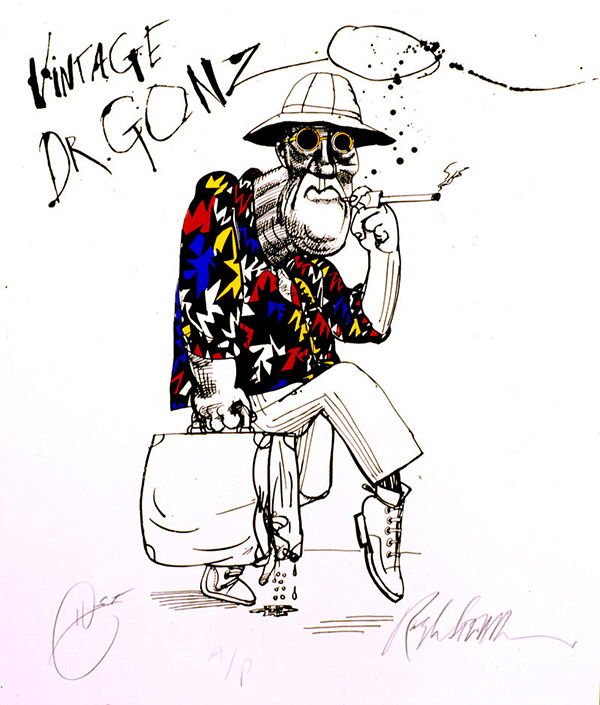 Gonzo-work: If I’d written all the truth I knew for the past ten years, about 600 people – including me – would be rotting in prison cells from Rio to Seattle today. Absolute truth is a very rare and dangerous commodity in the context of professional journalism.

A Gonzo-journalist is simply not destined to stick to his travel allowance – he will spend the last of the publisher’s money on some strong grass and rent a folding top car. He will send what can be called (with a stretch) a material in the last minute and cause a jump in arterial pressure in the editor, who will fail to proofread what would later be devoured by the whole reading nation. 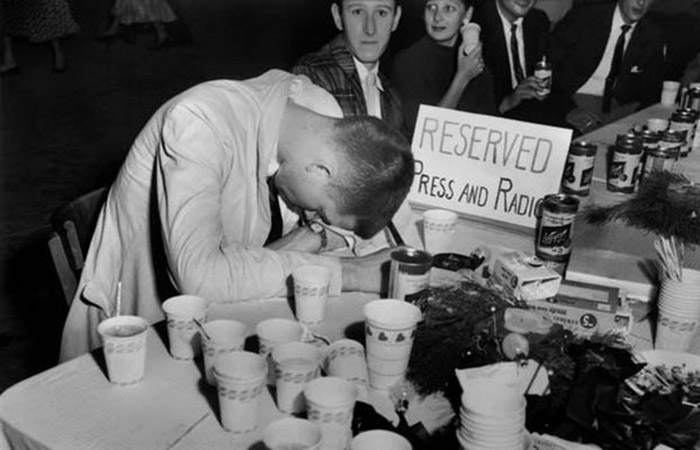 Gonzo-journalism is a work with a great deal of involvement, there is no such thing as “not for record”. A sober and precise report is so interweaved with unrestrained fantasy that you can’t tell the truth from the lies. Hunter S. Thompson will be named the best reporter of the “Rolling Stone” – a magazine that used to publish his rock-n-roll “chaotic raving”.

He didn’t make up news, he created them. His sensations were spreading with the speed of radiation. The more awkward and incredible were the news, the more readily people believed them, no matter if it was a dirty rumor of a presidential candidate’s addiction to a weird African drug or a bitter truth of Nixon’s War in Vietnam. In the conservative society, full of clichés and stereotypes, he was like a breath of fresh and forbidden air with a light aftertaste of whisky and Dunhill.

“Freak Power in the Rockies” was the first Hunter’s article in the “Rolling Stone”, which started his complex and lengthy romance with that magazine. In the late 60-s he got himself involved in an election campaign to be no less than a district Sheriff. The Freak Power Party was the name of organization gathered around a lanky bold-shaven psycho who promised the youth to legalize marijuana. The children of Ken Kesey and Timothy Leary couldn’t have failed to follow him. Hunter only lacked 500 votes to have Aspen renamed as Fat City. Having started as a provocative adventure, the campaign really introduced him to the world of big politics. 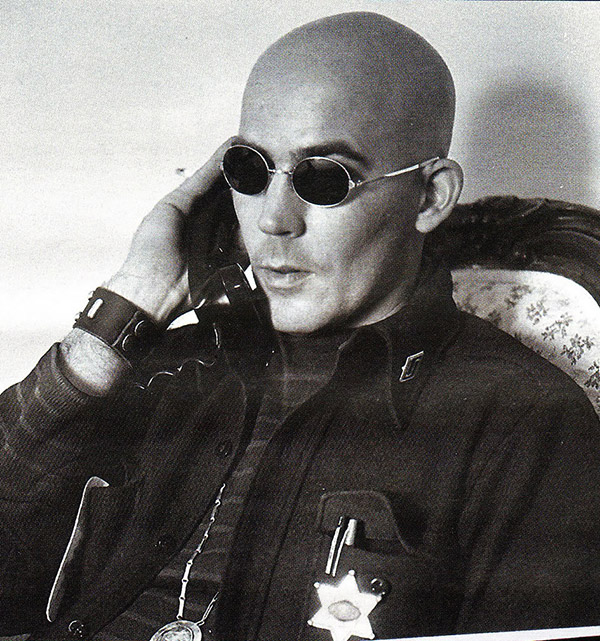 He took it, much as everything else, with juvenile enthusiasm. He laid the events he participated in to heart, dividing the world into good and evil, into bastards, who needed to be “ass-kicked”, and noble loser heroes. Working with politicians of his own choice, he became their loudest and most expressive bullhorn.
He openly hated Nazism, cruelty, race discrimination and Richard Nixon. He was a real Gonzo-patriot who knew the American Constitution by heart but would break the local and federal laws as often as ordering a beer in yet another shabby bar. The grown-up world of political reviewers had a soft spot for Hunter. 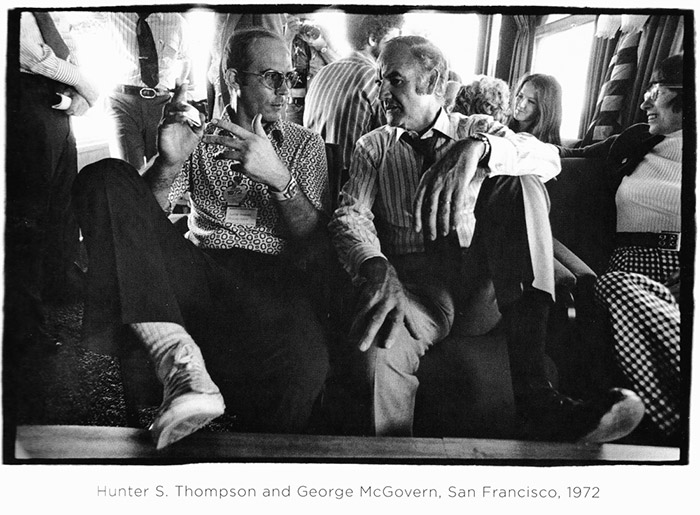 Gonzo-creativity: The Edge… there is no honest way to explain it because the only people who really know where it is are the ones who have gone over. 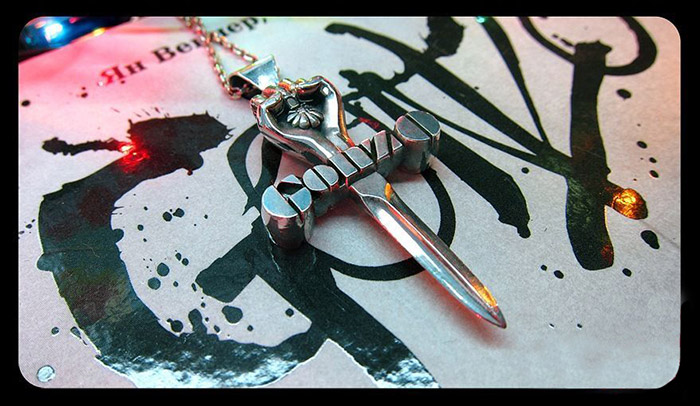 Gonzo-creativity is two bagfuls of wild ideas, seventy five filthy jokes, five revolting facts, a caster full of vibrating hate and a whole intergalactic planetary alignment of evil spirits, ravings, love and disgust… with a quart of talent, a quart of insanity, a case of Budweiser, a pint of gallows humor and two dozens of a desperate dreamer’s brutish follies.

Gonzo-creativity is complete “severance of diplomatic relations between the body and the brain!” 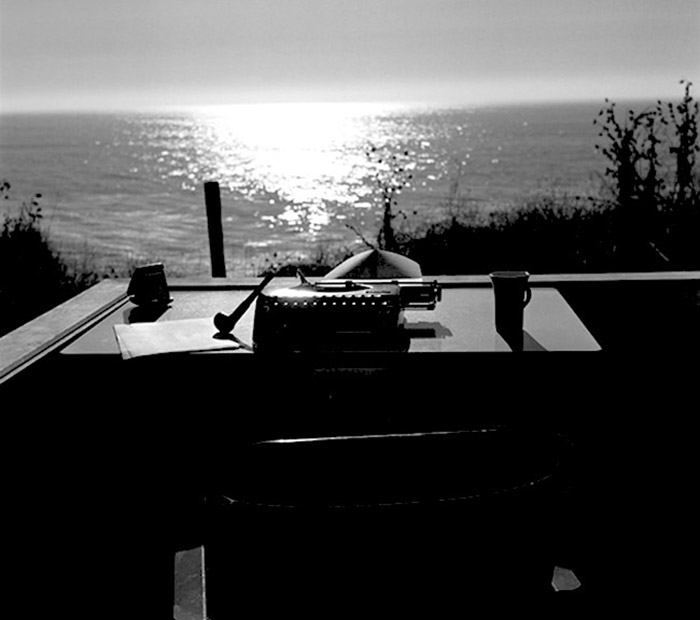 In the 60-s Hunter Thompson left America, where he was not called for, and went to Puerto Rico in pursuit of ideas and jobs. He had been working there for several local papers, serving as a night-watchman and creating his first real novel – “The Rum Diary”. The novel, however, will only be published much later, in 1999, when the author’s name will already be known to every American, and then cinematized. “The Rum Diary” has lyricism and sophisticated language, but also a sprout of Gonzo – as thick and porous as a peyote bud.

Dreaming to become a professional writer, Hunter polishes his style by retyping over and over the Fitzgerald’s “The Great Gatsby” and “A Farewell to Arms” by Old Hem on an old typewriter. He is creating his own inimitable way of composing. 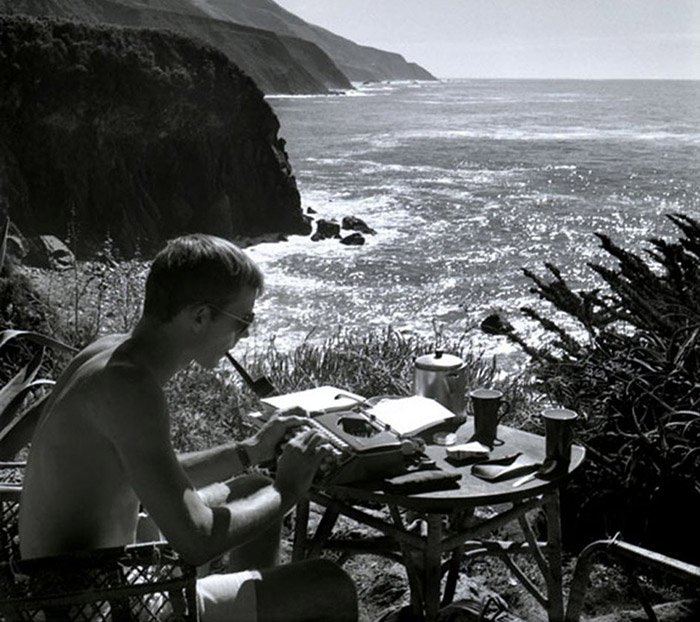 Hunter was not just a great inventor of stories but also a keen observer, which is probably one of a writer’s most important tools. Upon his return to USA he is roaming the country for almost a year in the company which most people would avoid – a gang of bikers, permeated with strong smells of drugs and violence. Finally, “the jinni is released from the bottle”. His book “Hell’s Angels” sees the light, and Hunter S. Thompson becomes the topic of day. His stories are shocking, his words roar like a hundred of engines, his style is shaped and ringing like wind in your ears, his thoughts scratch the perfect enamel of Hollywood smile like grainy road dust. The Gonzo phenomenon is growing.

Four years later, in the Autumn of 1971, he publishes “Fear and Loathing in Las Vegas” – an unprecedented journey across the bat valley with a trunk like a drug laboratory in pursuit of the “American Dream”. The writer’s alter ego, Raoul Duke, steps into the arena and erases the last borders between the author and the reader. The book reverberated, the story became cult, and so did Hunter’s lifestyle. Gonzo has now acquired not just a manner, but a voice, a walk, a smell and even a name. Many of Hunter’s articles of that period were signed by this name. 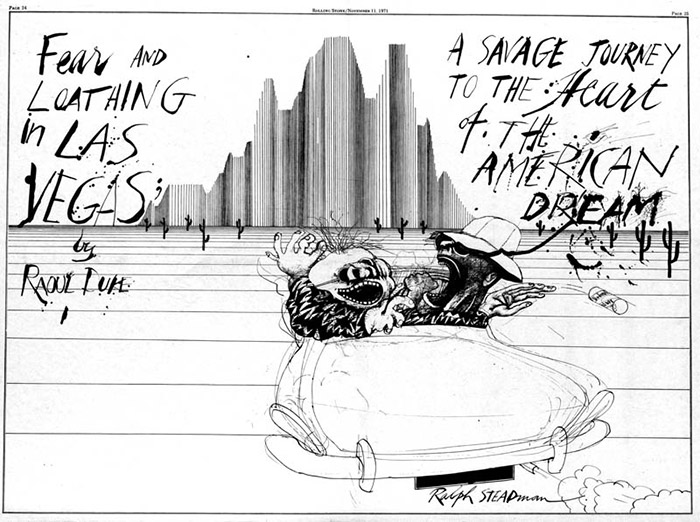 By the way, politics had never released Hunter Thompson. During the McGovern election campaign there was “Fear and Loathing on the Campaign Trail’72”. It was followed by the “Curse of Hawaii”, “Generation of Swine” and “The Great Shark Hunt”. Each book is full of notorious hooliganism, great humor, global contempt for conservative American values and an abyss of human tragedy. Hunter Thompson is aiming at the main delusion of the 70-s – that someone or something is keeping up the light at the end of the tunnel. Word by word he is mounting a memorial to his generation. 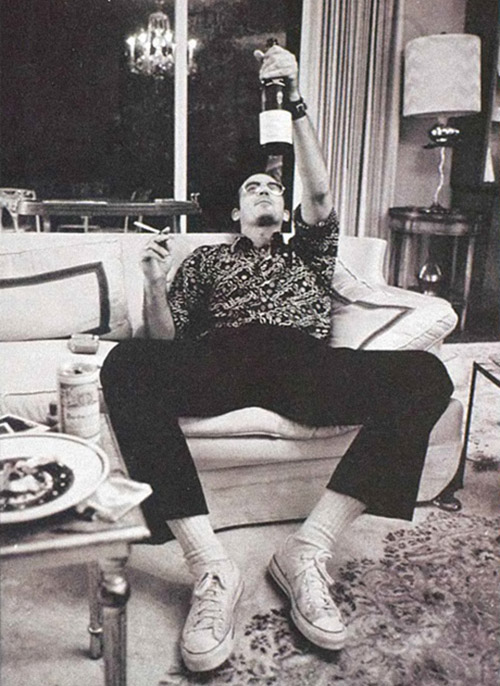 Never create anything, it will be misinterpreted, it will chain you and follow you for the rest of your life.

Raoul Duke had displaced Hunter himself – wherever Thompson appeared, he was not a participant of a situation anymore but a newsmaker. It restrained him in his work and art; he was writing less and less, staying most of the times at his Owl Farm in Woody Creek, drinking with friends, shooting cans and rearing frost proof peacocks. Hunter was being referred to as an outdated writer; he was criticized and constantly reminded of his success in the 70-s.

An obsessed muse of Gonzo: Walk tall, kick ass, learn to speak Arabic, love music and never forget you come from a long line of truth seekers, lovers and warriors. 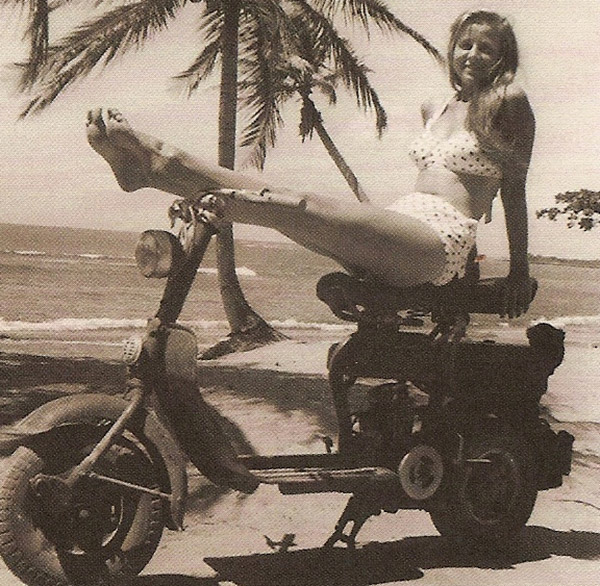 The muse of Gonzo, being a real freak, doesn’t resemble a long-haired blond with an angel’s face full of sin and admiration, though, naturally, Thompson was surrounded by exactly such creatures. What really causes a paranoid obsession is the speed, the feeling of thoughts flying around after a head-on crash with the wind.
Total psychodelia is just one lens which he will offer to his readers of a whole kaleidoscope that he owns: one may put on pink glasses of a Louisville junky or a faceted retina of a giant dragonfly with 28 thousands of cells. 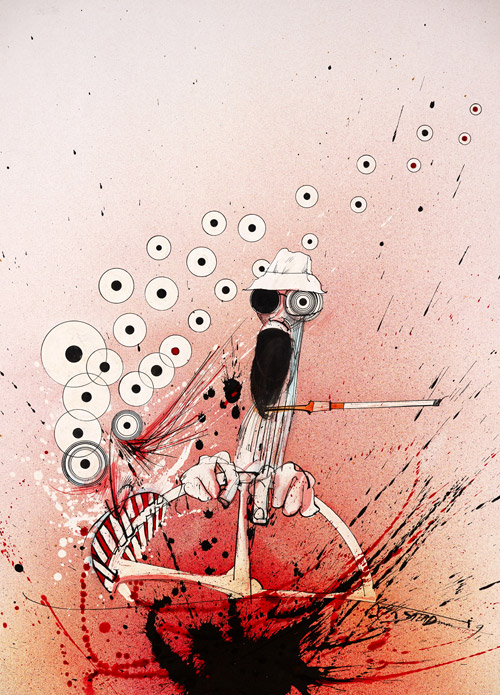 Gonzo is a quest, and the movement must not be interrupted: bits of thoughts, people and streams of information – that’s all material for constructing a new design of thinking. All it takes is to always have a voice recorder at the ready, or to scribble across tissues, receipts, hotel wallpaper, crumpled twenty dollar bills – just not to stop. If you catch the wave, just write:

Maybe there is no Heaven. Or maybe this is all pure gibberish – a product of the demented imagination of a lazy drunken hillbilly with a heart full of hate who has found a way to live out where the real winds blow – to sleep late, have fun, get wild, drink whisky, and drive fast on empty streets with nothing in mind except falling in love and not getting arrested.

The Football Season is over

The Gonzo era is over, but the Hunter Thompson memorial stands like a 153-feet dot-dot-dot in the shape of a six-fingered fist clutching a peyote flower. He designed it himself. The idea was to build a 150-feet monument in Woody Creek and to scatter the ashes through the giant fist with a cannon shot. Johnny Depp, who organized the funeral of his friend, has raised the monument three feet higher, because the Statue of Liberty is 151 foot tall, and Hunter Stockton Thompson had been a truer figure of Liberty.